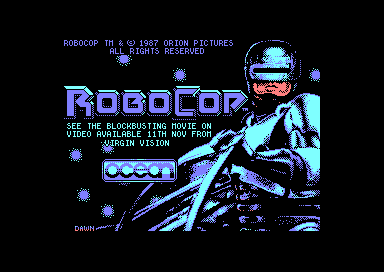 An adaptation of the Famous Robocop franchise, more specifically the first film from Paul Verhoeven in 1987.

The seminal playground film of the 80’s, this ultra violent film translated well to many home computer formats.

Based on the arcade machine, the game saw you take on the roll of Robocop, stomping from left to right in a spree of killing bad guys.

The villains attacked from both left and right, as well as the windows or platforms above.

They attacked on motorbikes, and with chainsaws, shotguns and grenades, adding to the cornucopia of explosions around you as soon as you pressed the fire button to start.

The 8 bit formats differed from the arcade and 16 bit versions in their levels, although the gameplay was largely the same.

Robocop had limited ammunitions supply and could get extra munitions in game. Also some special bullet with enhanced features.

When enemies were too close to you, Robocop used his fist instead of his gun as in Shinobi.

Despite the lack of "Jump" in gameplay, you can take stairs, so some levels are not only horizontal.

In between blasting levels, you were presented with various distractions; a photofit section to identify your next target, and the brilliant recreation of the scene where you shoot the bad guy in the nether regions through the womans’ skirt (although you were supposed to hit him in the head!)

The Amstrad and Spectrum version are quite close which seems to imply they share code. It uses mode 0 and os known for it's nice colourful graphics. It has software scrolling.

The game engine is probably reused on Batman: The Movie amongst others. ("Batman the movie" CPC's port available on CPC and Plus cartridge, yet a direct-disk-t-cartridge unmodified port.)

The game's engine is nice to play, yet perhaps a bit sluggish and the lack of the ability to Jump may seem a bit odd.

The 128K version has a well executed digitised voice of Robocop at the beginning of the play staying his prime directives: "Serve The Public Trust", "Protect the Innocent"...

It is considered as a classic from the CPC games, the kind of game you have to play to feel the CPC experience.

It wasn't too hard and despite a bit slow, remain interesting to this day.

{{#ev:youtube|tZeXlRSfHYE|300}} Seems that the CPC464 version lacks the Digital Voices.

The Robocop's music is a famous chiptune well remembered by Amstrad gamers.

It was composed by Jonathan DUNN.

It is to notice that the music is in no way inspired by film's score from the late Basil Poledouris (who also made Conan the barbarian, starship troopers, the blue lagoon...).

Here are some videos in relation with the chiptune :