The very first issue of Amstrad Computer User published by Amsoft and distributed to members of the Amstrad User Club. This issue was not available for sale in the shops but thanks to the early popularity of the User Club, the magazine is still pretty widespread and frequently comes up for auction on ebay and the likes. 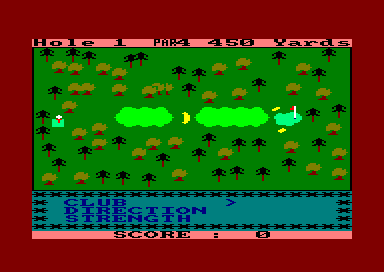 Take heart all you BASIC programmers. This program was written entirely in Amstrad BASIC, yet you would never have noticed if I hadn't told you.

The game consists of playing on an 18 hole golf course, with the aim of reducing your handicap. You can't cheat when the program asks for your handicap, since you are only given the first password, and must earn the rest by playing under par, and then being given the next level keyword.

There's a decent range of clubs to choose from, realistic strength shots (i.e. you cannot drive 800 yards by over hitting). If you land in the bunker or on the green, suitable screens await you.

Bounce off the trees at your peril, land in the water, in fact everything you might find on the local golf course without the expense or the exertion (or the danger of treading in the nasty reminders that the local dogs take their constitutionals on the course as well).

And if you wonder what the curious 'roar' is when you hit the green, that's only the crowd expressing their approval. Watch out for the 18th green, refreshment is at hand... 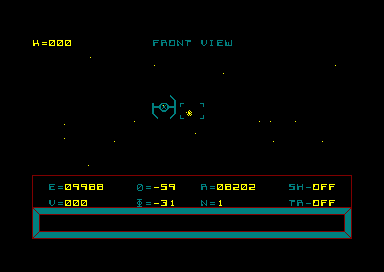 With titles like Jet Set Willy, Manic Miner, Atic Atac, it's not surprising that the inspiration for games naming is on the wane. There was a time when Codename MAT would have been called 3D-Hyper Mega Space Invaders - or worse. As it is, Mat stands for 'Mission Alien Termination' - not exactly the sort of sentiment to broadcast in case we are Not Alone.

That being said, the program itself is the classic space romp of all time. The solar system is being invaded by a bunch of unpleasant aliens who are gradually creeping through the outer reaches towards Earth. Your mission is to stop them.

This game combines the strategic skills of the classic Star Trek programmes that those of you with long memories may remember from the early days of CP/M S100 systems. In other words, you have a series of maps and tracking devices to help locate the little blighters as they wend their way towards Earth.

With these aids you must seek out and destroy as many of the aliens as possible (they are plotted on the Solar Chart for your convenience) by engaging them in one of the best 3D space fighter simulations you will ever see. When you get hit, sooner or later you will need to get repaired and refuelled, and docking with a planet or moon is one of the most delightful interludes in the game. Don't get too close, or gravity will draw you to your doom.

If you do nothing else in your first session, you must dock with Earth to see the detail that's gone into the game at every stage. Planets like Mars have their better known features on view - and although there isn't time or space to fit in all the known moons of planets like Jupiter, astronomers amongst players will not feel unduly cheated.

The only criticism is that the game takes a good evening to play properly. But if you 've had enough of the ten minute wonders then this is a must. Originals of Codename MAT may be changing hands in fifty years time in much the same way as the first editions of famous novels.

Micromega are further proof that for connoissuers of good software that its quality rather than quantity that counts in the end. If all they produce is one game every 3 months, and they're all as good as this, then you'll need three months before you are ready for the next one anyway! 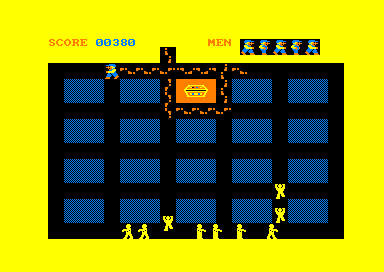 Another in the fine line of programs to appear to the accompaniment of a demented tune. No prizes guessing what sort of tune to expect when the hapless British Archaeologist sets about the tombs of Egypt.

Oh Mummy is one of those rare games where the beginners level reall does permit the unwary to beat the computer for once - although stepping up a grade or two gives the mummies the upper hand once again.

Why can't more games have an absolute novice level, or at least an option for unlimited lives while you hone the reactions?

Oh Mummy is a frantic dash around the catacombs, unearthin treasure, annoying mummies and eventually escaping with your life.

As ever, Gem Software have provided pages of instruction and general background to the game. I wouldn't have been surprised to find Gem Software listing the inside leg measurement of the mummies.

Smooth graphics and accomplished sound, but programmable to be not too frantic to frighten off those newcomers who quake at the prospect of understanding the rules of some of the mega games, let alone actually playing them! You will be relieved to learn that the tune can be switched off before your senses are embalmed by its haunting melody.

Roland in the Caves 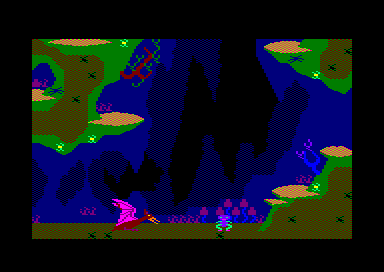 One of the most original and brilliant games of all time has been further enhanced by the pixel precision of the CPC464. In the effort to scroll the most detailed screen of any CPC464 game, there is some evidence of the picture tearing at the edges - but this does not detract from the main action of the game.

The title screen is accompanied by a jaunty rendition of La Cukuracha (I know it's not spelt like that, but when you hear the tune you'll recognise it immediately anyway!) The tune then gives way to exactly the sort of noise you'd expect to accompany a leaping flea.

Followers of games where virtually every key on the keyboard is needed will be surprised to learn that the only keys needed for this game are the Z and /. The idea is to guide the agile Roland (who bears a striking resemblaance to a flea in this incarnation) up and out of the cave into which he has fallen.

Pressing the key for a brief time causes the hop to be restrained - although to get a full blooded leap you must time the depression carefully until the power has peaked, as indicated by a bargraph at the top left of the screen.

The only problems are the Roland-eating flowers that litter the cave ledges, and the hungry and ubiquitous pterodactyl whose unwelcome attentions you will do well to avoid.

One tip for the beginner - always start by jumping right, or you will end up leaping down the gizzard of the flying menace.

Roland on the Ropes 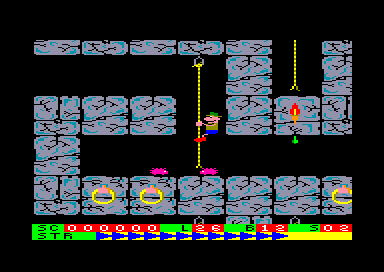 Another classic game with ghosts, spiders, rats, acid, treasure and some of the cutest and least menacing mummies you will stumble across. The idea is simple - get Roland from the bottom level of the dungeon complex (a random maze) to the top. Collect treasures, and avoid bumping into things that reduce his life expectancy.

The tune to send Roland on his way this time sounds rather like High Noon, although the nearest Roland gets to the OK Corral (I wasn't Film Buff of the Year either) is a trusty six shooter which can hold off the ghosts and zap the mummies.

Sound effects are convincing enough, especially the gunshots. The graphics are again an example to all in their use of colour and design, and you won't be surprised to learn that Indescomp are amongst the growing band of professional software houses who use trained graphic artists for design, and musicians for the sound track.

The game sets a high standard.