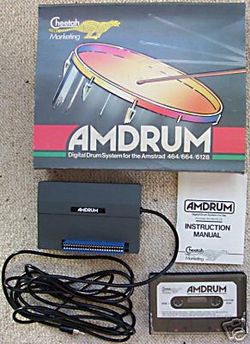 The Amdrum is an 8bit D/A converter (hardware) with drumkit (software), made by the British company Cheetah.

Quality of the playback was nice, considering the time and price. The samples were read from the suplied tapes. There were serveral tapes with different themes. Along with the Amdrum came a sequencing program. It was possible to copy the samples to disc, but the sequencing program had to be patched! Amdrum was probably Cheetahs version of the SpecDrum (As revealed on the PCB "AMSTRAD SPECDRUM"). Aside of Cheetahs own sequencer you can use some commands of the RSX ROM for LambdaSpeak III to use the Amdrum.

Now, thanks to Jose Leandro, the hardware specialist of the spectrum, with his famous page: