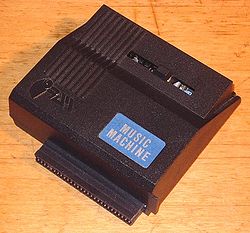 A digital sound sampling and playback device. The Music Machine was designed by Flare Technology and manufactured by RAM Electronics.

The Amstrad CPC version is almost identical to the the ZX Spectrum version, only difference was the address decoding logic.

The Music Machine incoporates two Ferranti devices for digital-to-analogue (DAC) and analogue-to-digital (ADC) conversion. The part numbers are ZN429E8 and ZN449 respectively. The circuit also include a Motorola 6850 ACIA chip (Asynchronous Communications Interface Adapter) for handling the MIDI channel, two anti-alias filters (one for input and one for output), a discrete microphone amplifier and a headphone amplifier. The clock signal for the ACIA and the ZN449 is provided by a ceramic oscillator.

The incoming signal from the microphone amplifier is sampled to an 8-bit resolution at a rate of 19.444 thousand samples per second. This yields an analogue bandwidth of approximately 9.5kHz which is in fact the cutoff frequency of the filters.

The clock signal for the ACIA is unknown. As said above it is based one the same oscillator as used for the ZN449, however, the oscillator is probably whatever MHz (?) divided by whatever (?), and its unknown if the ACIA and ZN449 clocks are using the same divider (ie. the ZN449 samples at 19.444kHz, but the ACIA may, or may not, use another frequency).

The Music Machine uses NMI interrupt, but it is not clear exactly what it uses it for. 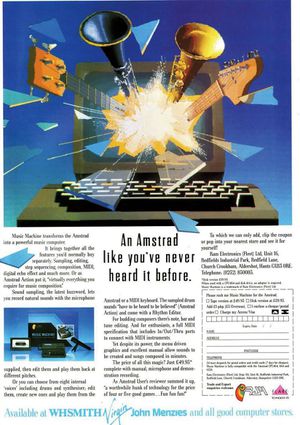