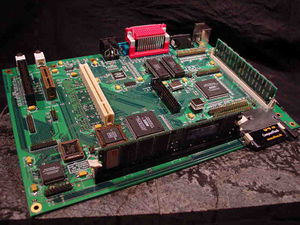 The C-One ("Commodore-One", later "Computer-One") is a FPGA based reconfigurable computer, manufactured and distributed by Jens Schönfeld. Initially it was developed by Jeri Ellsworth and is able to run several 8bit machines from the 80ies. Each computer has to be realised with a special so-called "core", which can be loaded into the FPGA chip. First the C-One should become mainly a modern and powerful C64 clone. But its original main developer Jeri Ellsworth was neither able to create a full running C64 core nor to develop a startup system for the core selection.

So the whole project ran into troubles before TobiFlex joined the C-ONE team and created the first complete core, the "Amstrad CPC 464 core". He also developed the C-One startup system, which is Amstrad based. Later he released the "TurboCPC core", which is nearly 100% compatible and can also run in 12MHz (later 24MHz) mode. This core is also used in the CPC TREX.

As there was no full working Commodore 64 core available for a very long time, but people could already use the very powerful and stable TobiFlex CPC cores, the C-One was often called "CPC-One" instead of "Commodore-One" by the scene. Several Commodore users lost their interest in the C-One, when its original creator Jery Elsworth surprisingly left the C-One team for a while and released a more or less competitive production called the "DTV-64", which was much cheaper than the C-One.