Hackit was a reasonably simplistic, but effective hacking device produced by Siren Software. 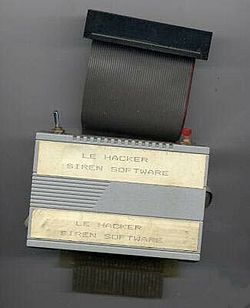 Though Hackit's hardware was much less advanced than Romantic Robot's Multiface, it was very useful in some circumstances.

Hackit consisted simply of a single sideways ROM, with an enable switch, and a reset button.

Enabling the switch would turn the ROM on; the user could then reset the CPC, and Hackit would run when it was initialised, rather than passing control to BASIC.

This had the disadvantage that the firmware and screen memory would be reinitialised, potentially wiping some of the code you wished to hack.

Hackit then presented a mode 2 command-line interface offering a range of useful hacking tools, including a disassembler, a (slow!) graphical overview of memory, a memory editor, a 'find bytes' function, and save/load commands.

It was coded and designed by Simon Cobb, the owner of Siren Software.

Hackit was exported to France and found significant success under the name 'Le Hacker'.

Frustration at the slow speed and erratic operation of Hackit caused some members of STS to start work on replacement ROM software, Doctor Fegg's Hack-Pack and Amigo (the Executioner), but neither was ever finished.

Utilities designed for use with Hackit