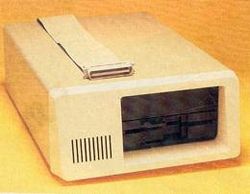 The emulator and the connection cable for the CPC

Also known as the PCE!

Text mostly translated into English from an article from the German magazine Happy Computer):

Article about the PCE

The new MS-DOS Emulator transforms every CPC into an IBM-compatible PC. Does this transformation payoff, or are you better off buying a completely new PC?

The rumors about a MS-DOS emulator for Schneider computers has been around for a long time but we have had to wait for it until now.

Our practical test will show if it has been worth the wait. The first optical impression of the emulator hints its purpose - the emulator is housed in a half size IBM-cabinet. Hidden inside is an almost complete computer based on the Intel 8088 processor, 512Kb ram, one or two 5¼ inch disc drives (40 track, double sided, 360Kb capacity, DOS-Format) and one slot for hardware expansions (Standard IBM cards in long form (ISA?))

The emulator is connected directly to the expansion bus of the CPC via a cable. (A version for the Joyce has also been announced and will appear at the end of this year)

After connection to the emulator the CPC only serves as input/output terminal. So at this moment the CPCs sole purpose is to let the emulator access its screen and keyboard.

It is planed to deliver some drivers, that in the future will make it possible to exchange data between CP/M and MS-DOS, and that will make the memory and drives of the emulator accessible to the CPC.

The software for this will be decided by the manufacturer based on customer demands.

More important than show of good will is the actual performance of the emulator.

After unpacking the emulator a desperate search for the MS-DOS system discs starts. Does MS-DOS reside inside the emulator on a rom? Wrong. MS-DOS is not included in the price.

Single MS-DOS licenses is almost impossible to get around, so the next task is to visit a friend and “borrow” a copy of the MS-DOS system discs!

On the CPC we typed the command |PC and after a moment the screen changes dramatically. The emulator ram test and the boot process of MS-DOS is shown on the CPCs monitor.

Even hardened professionals won't believe their own eyes when suddenly the prompt of MS-DOS appears on the CPCs monitor.

What is a practical test without a benchmark? And that’s how we will compare the emulator to other PCs

To run the benchmark we use this small BASIC program:

The emulator with GW-Basic runs the program in 8.5 seconds. A Commodore PC-10 with the same Basic interpreter is slightly slower (9.1 seconds)

The original IBM-PC with BasicA is even slower (11.6 seconds).

A dramatic difference can be seen when compared to the fast Schneider PC with Basic 2 (3.2 seconds)

No a direct test like this, is of course not fair as the preconditions are not the same. Firstly the processors are different (Intel 80860 in the Schneider PC and the 8088 in the emulator and the IBM-PC) and the Basic interpreters are also different. Even on MS-DOS PC the Basic dialects makes it difficult to exchange programs. For example; the BasicA runs only on the IBM PC, because the interpreter calls routines only stored in the original IBM rom.

Our experience in using different software confirms our positive impression of the speed. It is in fact possible to work professionally in combination with the CPC and emulator. To do this we recommend the emulator version with two drives: Firstly there is software that only runs on a PC with two drives, secondly it feels much more comfortable and the work runs much smoother with two drives.

Just before deadline we received news from the emulator manufacturer. The version of the emulator which we tested has been completely sold out and no more of this version will be built.

Instead a new version will be released. This new generation will have 256Kb main memory and one drive.

The new version also has a completely redesigned PCB. So that all components are on a single board. This makes the new version cheaper (to about 1098 DM) ...

Negative: No MS-DOS is delivered with the device

What's the use of this?

Actually this seems to be a complete PC minus the keyboard... the CPC being just a terminal/keyboard then, or is it not?

The article lacks some info :

Is the CPC mostly a Keyboard and a Graphic+Sound extension card...?

Some info courtesy of CPCRulez (French)