R-Type is a classic and cult Shoot'em up ported from the famous IREM's arcade game with the same name, released in 1987.

It was ported on almost every computer of the era and was released on Amstrad CPC in 1988. Despite being good, it remains an case of Speccy Port.

You make one little mistake in your life and the internet will never let you live it down.... Electric Dreams / Activision gave me 21 days to do the port. I wish i had the time to do a nice mode 0 port with new graphics, but alas it was never to be.

The completed Spectrum version - including the source code - was handed over on September 16th 1988 (Activision didn't quite get it that day but that's another story). This was the first day of the PCW show at Earls Court in London and Activision had press releases stating that the release date for this, and for the original Amstrad CPC version, would be November 1988. Keith received the source code the following week and started work immediately on the conversion (after a phone call or two) which means that, allowing for the 21 days it took to complete the conversion, the original CPC version was finished mid October.

Blast off and strike the evil Bydo empire!

The mastery of theses features is required if you want to master the game itself.

With gorgeous "Gigerish" graphics , unforgeable soundtrack , perfect gameplay and innovative level design , R-Type became a legend of the video game.There are a lot of clones and sequels , and a lot of shooters were (and still are) inspired by this game.

As said above, R-Type on CPC was a Speccy port.

Yet because the spectrum version was perhaps one of the best in the 8 bit area (and many say the best speccy game ever), the Amstrad version remained playable, fun, yet maybe disappointing and inferior to the Spectrum original:

It is of note that the speccy version was itself ported (graphically) from the Atari ST version.

As said the Spectrum version was good.

The main reason was because it was so close and faithfull to the Arcade original version.

As a result, even the humble Amstrad version was very close to the Arcade, at least in gameplay (even sometimes more than the c64 version).

Also the Amstrad version did include good (though sparse) sound effects too. It is also of note that the game is quite big, as it includes the full 8, challenging levels.

Last but not least, the intro screen is in Mode0 and quite nice.

Being attribute based animated, R-Type was of course a bit short on 464/664 config (=64K RAM) to get properly recoded in 2bpp graphic data. Yet a 128K RAM version can actually benefit from such true Amstrad CPC graphics and display 4 colours per 8x8 character (mode1) or 16 colours per 4x8 characters (mode0, wider pixels).

However, the single coder who did the port in 3 weeks simply couldn't do that because he had no graphician to re-do the graphics and no 128K version was actually planned.

How it could be:

Stage 2 map from the 128k version by Easter Egg. 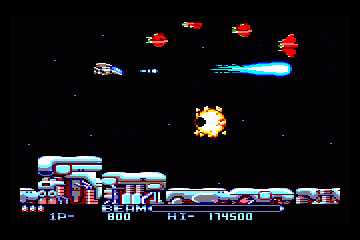