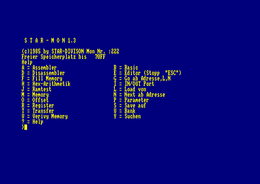 The Creator-Star BASIC demo in all its glory 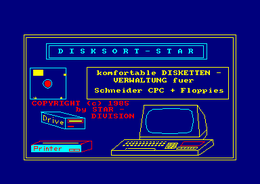 Star-Mon is a monitor program from Star-Division released in 1986. It also has a built-in line-by-line assembler (i.e. the assembly is not stored; instead the machine code is written directly to memory after a line has been entered), disassembler, hex calculator, memory dump, memory test, etc.

The BASIC version (run"gmon) only offers loading and saving from and to cassette, while the CP/M version (CPCMON.COM) defaults to the disc drive but can be switched to cassette.