C4CPC is a cartridge replacement for the Amstrad Plus range and the GX4000.

Using a micro-SD card storing cartridge images it also allows direct loading of the cartridge from a PC (Windows/Linux/OSX) through USB. 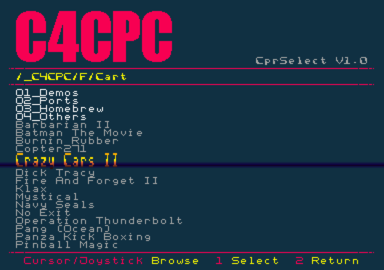 CprSelect is a special cartridge that allows browsing the SD cart for cartridges to load. The main area displays the current folder contents. Browsing is done using either one of the joysticks or the keyboard.

Left/Right jump from page to page if the folder cannot be displayed in one screen.

The SD must contains at least the following folder tree

At power up, CPC/USB whichever is the first, the uC will check for a valid .CPR/.BIN file to load in the DIP switch selected slot.

C4CPC is powered either by the CPC or/and the USB port. That means that power cycling the CPC will NOT initiate a new cart loading if the cart is also powered by USB.

A connected cart should appear as a serial port (COMx on windows, /dev/ttyACMx on linux, /dev/tty.modemxxxx on OSX). Windows require a .inf file to install the proper drivers. Loading is done using a python3 script which has the following syntax :

where port is the serial port assigned to the cart.

Latest version available in File:C4CpcCom.zip will only work with FW V1.00.01 and upward

C4CPC microcontroller firmware is user upgradable through the USB port and requires the following tools and drivers :

You now just need to run the update script :

File:C4CPC V1.00.03.zip : Fix bad behaviour in file read that may read more sector than available in a cluster 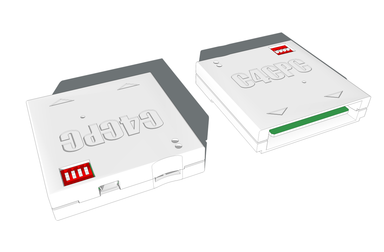 A dedicated cartridge case has been designed to protect your C4CPC. It can be 3D printed using online services using the stl file provided.

Link to online printing services are available on the forum dedicated thread.

The source sketchup design is also provided for those willing to customize it.

FutureOS Cartridge are available in the release file

Special System Cartridges made by dragon

- The Cartridge of 512 KB has a modified firmware/ParaDOS to include in the OS variable with | symbol:

-Incompatibilty: Don't try change the lower ROM with a external device such M4, this wouldn't work because how the C4CPC boots.

For games that have been converted to cartridge format, see here: Converted_GX4000_games