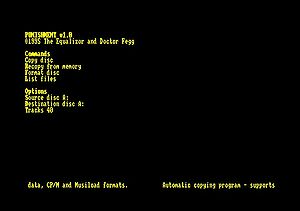 Punishment was a fast disc copier bundled with BTL issues 3 and 4, specifically designed to copy the unusual 256-byte sector format used by BTL. It could also copy standard formats.

Among its features was the ability to use any extra memory as a transient disc buffer. In other words, if you had a 256k memory expansion, you could read a side of a disc into memory once, then write it out to as many separate discs as you liked - without the need to read the original again. This made it well suited for duplicating disc fanzines like BTL.

It was written by Doctor Fegg and The Equalizor. The name is a fairly obvious pun on Crime, the popular disc copier written by BENG! coder Crown.

An undocumented feature would sometimes see abusive messages pop up, or directory entries changed, if you attempted to copy 'scene' software of which the authors disapproved.